A Legacy of Helping Others: The Story of Elizabeth Chan 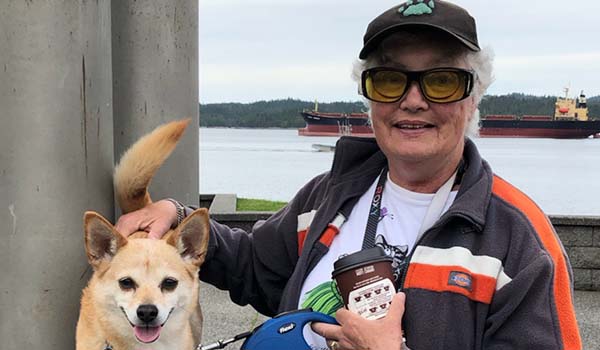 Elizabeth Chan was someone who believed in the importance of helping others. It is a philosophy that her entire family lived by, and it’s the way that Elizabeth wanted to be remembered.

Elizabeth was born in England in January 1951 and immigrated to Canada in 1957 along with her parents, Keith and Irene Beard, and her sister. Both Keith and Irene became teachers with The Winnipeg School Division #1, and in their spare time they remained dedicated to helping others. Irene began volunteering at The Vic in 1971, working in many areas of the hospital over the years. Keith also began volunteering at The Vic in 1994, working in the Gift Shop and installing Victoria Lifeline’s medical alert service units in the homes of clients.

As an adult, Elizabeth followed the example set by her parents and looked for ways to give back to her community. She began volunteering with the Society for the Prevention of Cruelty to Animals and was an avid supporter of her local senior centre.

Her friend Vaughan New recalls that her philanthropic spirit began at a young age.

“When she was younger, she didn’t have much,” said Vaughan. “When she did get cash, she wanted to help out as much as possible. She held on to her money and let the interest grow.”

Vaughan first met Elizabeth’s husband Don 25 years ago when he was out fishing. Don, who had many years of fishing experience under his belt, took the then 13-year-old Vaughan under his wing and quickly became his fishing mentor.

“I’ve been a fishing guide out of Prince Rupert for seven seasons because of what he instilled,” 39-year-old Vaughan recalls fondly.

For many years, Elizabeth and Don lived a peaceful life together in Prince Rupert. They loved taking the camper out to the river, letting their dog Ginger run free while Elizabeth would watch Don fish.

“Don and her were like Romeo and Juliet,” said Vaughan. “They were from two different walks of life: he was from China and she was from England.”

Elizabeth and her family would face difficult times in the ensuing years. In 2004, her father Keith began experiencing health problems, which forced him to leave his volunteer work after a decade of dedicated service. Irene also left her volunteer role after 33 years in order to care for her husband.

Sadly, Irene passed away in June 2006. Shortly thereafter, Keith and his daughters created The Keith & Irene Beard Endowment Fund with Victoria General Hospital Foundation in Irene’s memory to express their gratitude for the exemplary care provided to Keith and the added years of memories given to their family. This endowment provides funds for Urgent Care staff to obtain specialized training. Keith passed away just a few years later in March 2009.

In 2013, Elizabeth’s husband Don was diagnosed with brain cancer and passed away the following year. It was a difficult time for Elizabeth.

“It was hard to see her go through that,” said Vaughan. “You could tell he was her whole world. She missed him every single day.”

After Don passed, Vaughan came by to pay his respects. Elizabeth asked him to help with her estate and the two soon became friends.

In the years that followed, Elizabeth stayed close to home. She spent her time going for walks with her beloved Ginger and enjoying her favourite treat – a McDonald’s coffee.

While she lived a quieter life in her later years, her passion for helping others remained as strong as ever.

“She had a shed and she let a local guy store his tools and lawnmower in it,” recalls Vaughan. “That’s just the kind of person she was.”

Elizabeth wanted to ensure that any funds she had remaining would go to help benefit others. She decided to leave her estate to Victoria General Hospital Foundation, specifically to The Keith & Irene Beard Endowment Fund she helped to create a decade earlier.

“There was really a connection with her family starting it, she really believed in her parents,” said Vaughan. “She knew her parents loved their time at The Vic and knew by donating it would get used in so many ways. She just really liked helping others.”

Elizabeth passed away in May 2020. Her gift will help to continue the important work her parents began at The Vic Foundation and ensure her legacy of helping others carries on for generations to come.

“She wanted to be remembered as someone who gives back and enjoys the time,” said Vaughan. “She wanted to leave the world a better place.”